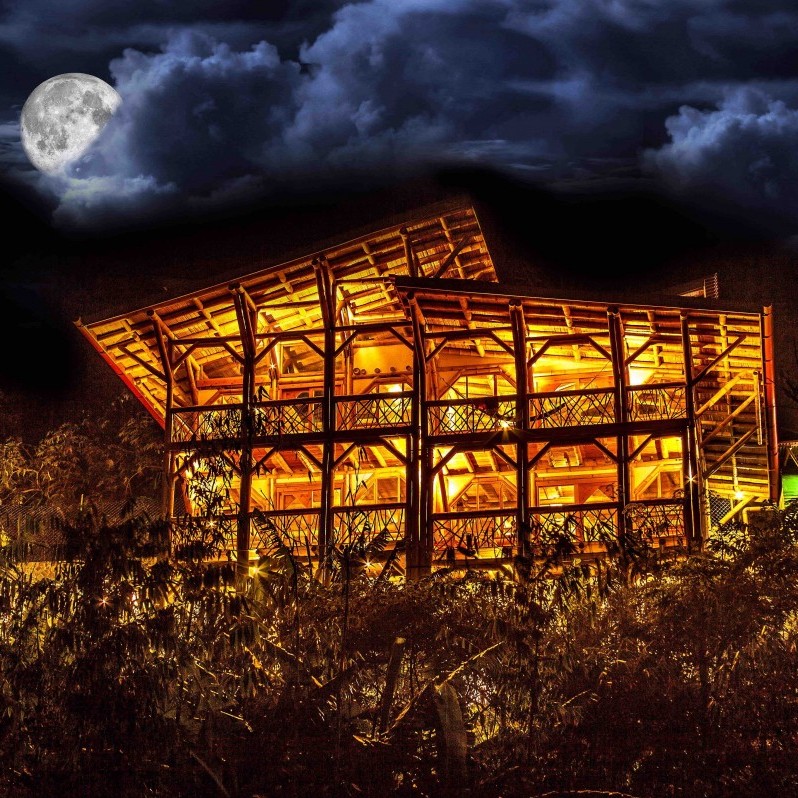 In May of 2016 I was fortunate enough to visit Charlie Rendall at his home in San Marcos la Laguna, Guatemala. Charlie is the owner of “Return to the Forest,” a natural building and education company that specializes in bamboo and local earthen building techniques. On a sunny Friday morning I hiked up to his property, which would have been impossible to find without directions. A little scramble up a meandering dirt path through a narrow alley and dense tropical foliage to a framed bamboo gate that opens into his lush but bustling homestead. I dodged my way around the local carpenters who were preparing lumber for a current build project, and up to the elegant bamboo and bajareque cottage that serves as Charlie’s office. Charlie greeted me warmly with a beaming smile hidden behind a big unruly beard that added stacks onto his 43 years. I waited a minute on the cobbled porch of the office while he wrapped up some work and phone calls with his design crew tapping swiftly at their computers. When he came back out, the abrupt change from Spanish to a calm British accent seemed like being reintroduced all over again. From there we headed back out to visit some of his current projects. For the rest of the afternoon we toured some of his buildings, both ongoing and completed, that showcased the beautiful potential of bamboo framing and innovative inclusions of stone, adobe, custom carpentry, and earthen plasters. I was full of questions about everything from the foundations to the finish-work, and was happy to find an accomplice who talks about natural building with the joy and enthusiasm of kid on Christmas. After a late lunch at the Atitlan Organics Hotel, which he also built, we made plans to meet again the next day for a more formal Q and A.

I made the hike up to Charlie’s place once again the following morning to find the same frenzy of carpenters buzzing about the workshop, with the sounds of table saws and power tools competing with the birds and critters of the surrounding jungle. Charlie and I decided to retreat to a quieter corner of the land and climbed through the maze of buildings that he and his partner have built over the past twelve years, and onto a shady balcony out of the noise. There we sat down to talk about how he got his start in natural building and how his business and work have evolved in more than a decade since he moved to Guatemala.

“Natural building, especially in a place like San Marcos, means helping to develop the town in a way that benefits the locals as much as foreign investors.”

Charlie first moved to the sleepy lakeside town of San Marcos to live with his partner back in 2004. His only previous experience in the building trades were a few home carpentry projects, and his master’s degree in Social Anthropology wasn’t of much help with the hands on aspect. The house he moved into had been built by his partner who also had no previous building experience before starting on the home, and so Charlie was encouraged to see that at least the basics of construction might be approachable for a beginner. With inspiration from the first house, the two of them started to build a small play house for their son out of wood. Guided by advice from a carpenter friend of theirs, Charlie quickly began to pick up the fundamentals of carpentry.

“Soon after,” Charlie told me, “I cut my teeth on my first cement block structure when we needed a place to house the volunteers we were hosting. Through this experience I learned that the basics of construction and planning are very approachable, even to novice builders like I was.”

“In attempting that first three story structure, I made lots of mistakes and learned a lot.” Charlie confided.

“Over the next four to five years,” Charlie tells me as he points to the different buildings from atop the balcony, “I got a lot of experience from building small projects on my own property. It was during this time that a neighbor of mine introduced me to the idea of building with bamboo, and after working on my first project with him I became just as fanatic as he is about using bamboo as a building material.”

From there, Charlie organized his first natural building course with his neighbor as the instructor at the end of 2008, and shortly after the workshop, he took his first real contract to build a house for a woman who had volunteered at La Cambalacha (his partners’ arts education project), using primarily bamboo.

When asked what the advantages and disadvantages have been of working in this small backpacker town in Guatemala, Charlie told me, “I feel lucky to live in a tourist town that attracts the types of alternative lifestyle and “new age” people who are into building with natural materials.” The constant flow of foreign visitors has kept him in work for the last eight years and have allowed him to meet people who have challenged him to take on their ambitious projects. In some recent projects that have gone beyond residential structures, Charlie has enlisted the help of a local civil engineer who has advised him on how to build seismic and weather resistant buildings.

I was also eager to know how the indigenous community of San Marcos was reacting to all the alternative ways of building. Charlie informed me that there has actually been a lot of positive interaction with the locals for a few key reasons. “To begin with, they’re glad to see that their traditional methods such as bajareque (a local variation of “wattle and daub” in the west), and adobe are valued by the outside world,” He told me. “The renewed interest in these techniques has also helped to bridge the divide between the generations. Younger people are seeing that the knowledge of their grandparents is valuable rather than outdated, and are reconnecting with them to learn their traditional ways of building.”

The boost to the economy from the new developments is also helping to employ many locals. People who would have otherwise had to go to other towns to find employment can now make their living closer to home. With each new project also comes the opportunity to learn new skills and gain experience. The tourist industry has also brought higher value to traditional and natural building techniques.

The small town of San Marcos is not without its limitations, though. “The biggest challenge of working in this fairly isolated and undeveloped place,” Charlie confided, “is that the level of education of locals can be a major roadblock. Many people in this town have only had a few years of education and never had the chance to learn basic maths. Fortunately things have improved a lot in the twelve years since I’ve lived here, but there’s still a long way to go.”

“What’s more,” told me, “is that what’s adding to this education deficiency is that skilled and ambitious people quickly move to where their abilities are better compensated. The resulting “brain drain” makes it difficult to raise the standard of education and work here.” Another challenge of this particular place is that, because of its remote location, specialty tools can be hard to get, and like many developing countries, dependable and high quality professional services can be tough to find. On top of all of this, because it is located in a seismically active zone very close to major volcanoes, earthquakes and even flooding and mud slides also present constant design and engineering challenges.

As the looming clouds of the afternoon rains clustered over the lake we switched gears a bit and I asked Charlie what advice he would give himself, knowing what he knows now, when he was first getting started building on his own property. With a laugh he quickly replied. “Don’t build so many cheap flat roofs. I know it can be tempting,” he added, “but one of the biggest problems I have now is dealing with all the leaks that are a result of rushing to get the roof on and cutting corners on the cost of materials and the designs.”

“In general,” he continued, “it’s always a good idea to spend more time planning and budgeting, don’t hurry into building. A house is a big investment. I know it’s exciting and sometimes urgent to get started right away, but you’ll save yourself a lot of headaches by taking the time to plan things out thoroughly.”

Charlie also advised, “You should also try to think long term. Not only what are your needs now but what will you need and how will your life grow in the next 5-10-20 years? Part of that thinking is remembering the cost of maintenance. Spending a bit more for better materials now can save a lot of money down the road.”

Before wrapping things up I got to ask Charlie what natural building means to him and to this village he calls home. He replied, “Natural building, especially in a place like San Marcos, means helping to develop the town in a way that benefits the locals as much as foreign investors. Inter-generational connections are made this way as well as intercultural ones, and when we use natural materials and design in a way that considers all the people involved, the environment can be worked with, rather than against.”

For more information on Charlie Rendall and his work you can visit his website at returntotheforest.org and get in touch with him through the contact page there.