Morag Gamble on hope for regeneration in refugee communities

As we continue to dive deeper into this series on how to build strong communities I wanted to take the time to try and understand some of the unique challenges of some of the most difficult community circumstances. I’m talking specifically about refugee settlements and communities of displaced people. It’s unfortunately true that camps and shelters for people who’ve been forced to move are growing massively in recent years. Conflicts in Sudan, Eritrea and Ethiopia, Syria and most recently in Ukraine have caused millions of people to flee to neighboring countries and further abroad in just the last couple of years. Conflict is certainly not the only reason for mass migration either. Natural disasters have exacerbated and floods, fires, drought and storms are increasing in intensity and frequency causing a growing population of climate refugees.
While there are so many different approaches to solving these growing issues, I want to focus on how to bring progress and hope of regeneration to the people in these vulnerable living situations.

I have my own experiences from living in developing areas of the world. I distinctly remember teaching courses at the houses of my neighbors in Guatemala to build more efficient earthen cook stoves for people who were used to cooking on open fires in one room adobe houses. During my travels I’ve seen and interacted with many communities of few material and financial means, but I’ve never worked closely with displaced people or gotten to know the challenges they face. For this perspective I reached out to Morag Gamble about her direct work with refugee settlements in different countries.

Morag is the founder of the global Permaculture Education Institute. She teaches permaculture educators and [pr]activists online, but also in universities, libraries, ecovillages, community gardens and refugees settlements on 6 continents. She experiments with one-planet living at her ecovillage home in Australia and in her award-winning permaculture garden where she has lived since 1998 with her family. Morag mentors the global Permayouth and has supported over 1500 refugee youth and women to access free permaculture education through her charity Ethos Foundation. She’s a permaculture writer, podcaster, YouTuber, and blogger who speaks up for the wellbeing of life on this planet as a planetarian [pr]activist.

Morag is also a core member of Permaculture for Refugees, and collaborates with permaculture humanitarian organizations and speaks daily to refugees.

In this interview, we start by exploring how Morag’s background in permaculture instruction led her to working with displaced communities.

She helps me to understand both the differences and similarities between refugee communities and others that she’s worked with.

We talk in depth about how permaculture education is relevant to people who’ve been displaced and are living in extremely difficult circumstances and scarce resources. Morag also sheds light on the concepts that have really stuck with the people she’s worked with there and how they’ve integrated the concepts into their own knowledge, culture, and interpretations.
It’s really worth sticking around to the end as well as we explore Morag’s vision for how the international community could transform how it deals with displaced communities. How we could all begin to see these people for the incredible potential and gifts that they bring with them to the communities they seek refuge in and how we might contribute to their recovery and integration.

We also explore how people who are interested in getting involved with this kind of important work can get started. Morag has an online course right now that can serve as a stepping stone into bringing hope and ecological abundance to these vulnerable communities 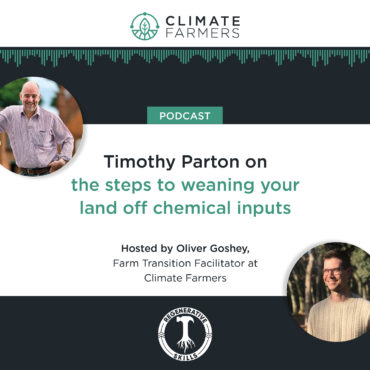 Click here to be matched with an expert consultant or mentor for your regenerative farm journey! Agriculture around the world is at a critical moment. We find ourselves between simultaneous […]